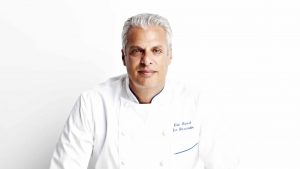 Of all the native French who made a living in the United States of America, perhaps none is best appreciated or as well known as Eric Ripert. Even if you don’t recognize the man’s name, you might recognize a few of his successes in life. He was a chef who created a big splash in New York City with the popular restaurant, Le Bernardin. On top of that, he was known as both a writer and television personality.

Le Bernardin isn’t just well known, it’s critically acclaimed among foodies. It is consistently ranked as one of the best places to eat–anywhere–in culinary magazines and big name newspapers. It was named as one of the world’s fifty best restaurants on S. Pellegrino’s list.

As with most successful chefs, Ripert learned to cook from a young age. He learned by studying at his grandmother’s side, and eventually went on to culinary school in Perpignan. He moved temporarily to Andorra, but eventually went back to France and then moved to Paris when he was seventeen. While he was there, he spent time working at La Tour d’Argent, a restaurant that was over four centuries old. He continued to gain experience there, and then again at Jamin. He found a new mentor in Joel Robuchon before moving on.

In France at the time, military service was required of its youth. He went off for his in 1982.

A few years later in 1989, he made his way over to the U.S., finding immediate success. He worked in the Jean Louis Palladin restaurant in the Watergate Hotel as a sous chef for only two years before bouncing to New York City, where he worked for David Bouley. He stayed in New York for a while before he was granted a four-star rating by the New York Times and then became part owner of Le Bernardin in 1996. This propelled his career into overdrive, and he found himself graced with a few more four-star ratings, while his critical notoriety soared.

He opened the Westend Bistro in Washington D.C. in 2007, where casual cuisine is served. In 2008, he opened 10 Arts in Philadelphia.

Ripert has appeared in multiple seasons of “Top Chef” as a guest judge or assistant chef, and he also sometimes appears on popular cooking shows. He has an online series that teaches the viewer how to cook simple, quick meals with nothing more than a toaster oven. He has appeared on a PBS series following him around the world, and Anthony Bourdain’s No Reservations. He has also published a number of books. Right now, he is 52 years old.