What Spirits are Produced in France 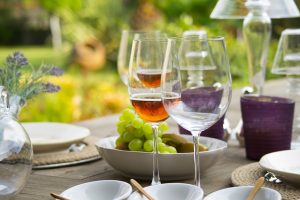 Alcohol is one of the oldest and most commonly celebrated substance in the world. It seems like each country is known for their own specific type of alcohol. Some are known for wine, while others are known for vodka, whiskey, or beer. Whenever you hear France, you think of wine and cheese. Interestingly enough, France is not only known for their wine, but for their carefully crafted spirits. Spirits, or liquors, are the oldest form of alcohol and can include all types of liquors (vodka, gin, tequila, rum and whiskey). The difference between a spirit and other types of alcohol are that spirits are distilled and the have a higher alcohol by volume. The ABV of spirits usually falls in the range of 20% to 80 or 90% ABV.

The French have been producing spirits just about as long as they have been producing wine. You may not know it, but many of the popular cocktails you drink would not be possible without French spirits. I’ve put together a little crash course of French Spirits to get your taste buds going.

Cognac is the oldest of the French spirits. Cognac must follow strict production methods including being made in a copper pot, aging in French oak for a minimum of two years, and is distilled twice. Cognac’s main ingredient is Ugni Blanc grapes.

Armagnac is widely considered “the original cognac.” The dirtier version of the spirit is made from the same family of grapes and is distilled only once, creating a heavier more flavorful spirit.

Grand Marnier was created in 1880 by Alexandre Marnier-Lapostolle. Grand Marnier is an orange liqueur that is cognac based. The most notable drinks that include Grand Marnier are the Cadillac Margarita and B-52. It is not uncommon for people to enjoy Grand Marnier on the rocks or straight up.

Similar to Grand Marnier, Cointreau is a bitter orange liqueur. The difference between the two is that Cointreau is made of a natural spirits while Grand Marnier is cognac based. The result of the natural base gives Cointreau the edge when is comes to mixing cocktails. Cointreau is often used as a top-self version of triple sec.

The roots of this herbal liqueur trace back to 1605 when the Carthusian monks began making this spirit. The spirit contains 130 different herbs, spices, roots and barks. Chartreuse comes in two flavors, green and yellow. Green Chartreuse is 55% ABV and is considered the spicier and drier version of the two. Yellow Chartreuse has a lower ABV (40%) and is considered to be softer and sweeter than green.

Benedictine is the second herbal spirits to make this list. Created by Alex Le Grand, this rich, peppery, honey-sweet flavor is often consumed neat or in conjunction with Brandy.

Calvados is from the Northwest region of France. The apple-flavored brandy can be used in any apple based cocktail. One of the best ways to enjoy it is in between course when you are looking to wake up your appetite.

Absinthe, AKA the Green Fairy, might be the most famous of all French spirits. While the idea of Absinthe is originally from the Swiss, Absinthe had been intertwined in French culture as far back as anyone can remember. The spirit has reached a mythological status and has been banned and rediscovered in many countries, including France, around the world. One of the best glasses of Absinthe you can have is from one of the oldest producers of the spirit, Pernod Absinthe.