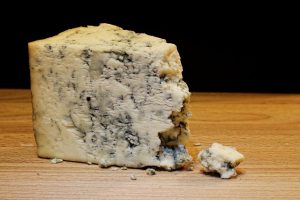 Americans have a tendency to pasteurize absolutely everything, even when we don’t need to. This is the result of socially reinforced health and safety standards that are supposed to benefit everyone. For example, there are all types of bacteria both good and bad, and most of them won’t do us any harm. Pasteurization often destroys the kind of bacteria that make your gut healthy, and so a lot of the cheeses that are unpasteurized can be hard to find in America–or are at least absurdly priced.

Luckily, you can find some types of cheese everywhere based on popularity alone. Roquefort cheese is a pasteurized brand of cheese that originated in France. It is made from the milk of a  Lacaune sheep, and you can easily tell you have the right one by the obvious blue mold growing within the brick of cheese. It is also usually of the whiter variety, crumbles easily, and tastes tangy and moist. You might also detect the flavor of butyric acid which itself is a product of a certain type of fermentation–and although we won’t detail it in full here (nor would you want us to), it is found in and smells of human vomit. Yummy!

By law, only cheeses that are aged in a specific region of Southern France, the caves of Roquefort-sur-Soulzon, can be branded Roquefort. This variety in France is the king of all cheese, and it takes about four and a half liters of sheep milk to make only a kilogram of the final product.

Without the caves in which Roquefort is produced, there could be no Roquefort cheese. This is because the veins of mold inside each brick can only be found and manipulated from within these caves. It grows within the soil, and so only companies with access to these caves and the specific kind of mold can produce the cheese.

The cheese takes approximately five months to age, and is best enjoyed between the months of April and October.

Roquefort cheese isn’t only known for its distinctive taste. Prior to the discovery of penicillin, it was used as a medicine. Shepherds in the area would use the cheese as a salve, applying it directly to wounds. It was known to curb the chances of coming down with gangrene. Studies done on the medicinal properties have maintained unsurprising conclusions, based on this other usage. In 2012, the cheese was found to have anti-inflammatory properties, and another study a year later discovered that the proteins in Roquefort can stop the spread of Chlamydia.

In other words, if you want to say no to sexually transmitted infections, say “yes” to Roquefort cheese!