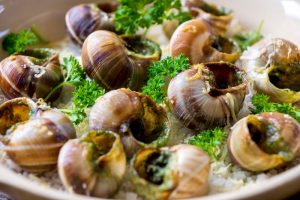 For those of us who aren’t very adventurous–or perhaps just overly squeamish about what we eat–it can be a good thing when cuisine from overseas bears a name pronounced in a foreign tongue. Although most of us already know what escargot is, this can especially be the case for those of us who don’t. Escargot is French for snail, and the dish is generally eaten cooked with a hint of lemon. It may bear the same name even for those varieties that are left raw.

The etymology of the word has a more literal translation, adding in the word “edible” to make escargot mean “edible snail.” The first use of the word seems rather new, historically speaking, and goes back only to about 1892. Even so, historians do know that escargot the dish was enjoyed in ancient civilizations. To the Romans, it was a rare, expensive food that only the wealthy could afford. But the human palate for snails goes even farther back than that. Archaeological evidence shows that snails were enjoyed in prehistoric times as well.

When you eat escargot, the type of species matters. Land snails can sometimes be altogether inedible. Some are even too small for mass consumption. Of the species that are edible, there are a number that simply aren’t desirable. After all, the taste of a creature’s flesh is important when you’re about to consume a dish often known as a delicacy. Some species are also a good source of protein.

Because the dish is so well known, it even gets its own unofficial American holiday–May 24 is National Escargot Day.

Escargot are often farmed because of their desirability, and these are usually sustained with ground cereals. Naturally, no one wants to eat a snail with full bowels, and so sellers will often forego feeding for a few days prior to sale. After that, the escargot is ready to be cooked and eaten!

Preparation of escargot varies depending on the region where you consume it, but the French variety of the dish is typically prepared with a generous helping of garlic butter, soup, or wine. These substances are used during cooking. The snail is removed from the shell, cooked in whichever other ingredient the chef decides to use, and then likely replaced in the shell. Usually, they are served by the dozen or half-dozen.

In the United States, you might not often have the chance to experience this dish. It is often highly recommended by those who have tried it, and you’re most likely to have the option as part of a cruise or resort stay, or at a fancy restaurant. If you do decide to indulge in this popular French cuisine, then you’ll enjoy a heft fifteen percent protein content in addition to just over two percent fat.