Jack Kerouac was one of the famed Beat Poets of the 1950s. He was best known for his novel about American life entitled “On the Road”. This novel, which only took three weeks to write, but another seven years to publish became an American classic defining the Beat Generation.

Kerouac was born in Lowell, Massachusetts in 1922. The area, which had once been a thriving mill town, was spiraling into poverty and had more than its fair share of heavy drinking and unemployment. Kerouac was the son of French immigrants from Quebec, Canada and grew up speaking French as his first language.

In 1926, Kerouac lost his older brother, Gerad to rheumatic fever. This had a profound impact on the young boy. The entire family became even stronger Catholics and much of Kerouac’s later writings employed imagery from time spent in church. 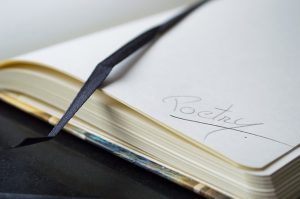 The young Kerouac enjoyed reading and sports, excelling at basketball, football, and track. He loved reading and cherished a dream to be a writer, but believed his future lay in professional sports. Kerouac secured an athletic scholarship to college but first had to attend a preparatory school in the Bronx. This is where he was first introduced to jazz, which became a strong influence in his life.

In 1940, Kerouac began his freshman year at Columbia University and played football. Following an injury, Kerouac was sidelined and eventually quit the team and dropped out of college.

Kerouac eventually joined the military as a Marine, but only made it ten days before being discharged for “strong schizoid trends.” He ended up in New York City and became part of a group of friends who would end up defining a literary movement. Kerouac’s novel “On the Road” was published in 1957. He followed this success with “The Dharma Bums” and “The Subterraneans”, along with three other novels. Kerouac died at the age of 47 due to an abdominal hemorrhage.