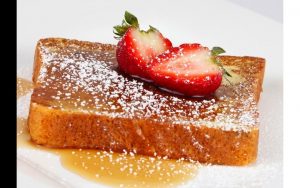 One of my favorite breakfast foods, French Toast is another misnomered foods. The first recipe for French Toast dates all the way back to the 4th or 5th Century, found in a Latin recipe book called the Apicius. But they opted to use honey as maple syrup wasn’t a thing back in Ancient Rome.

The next reference to French Toast wasn’t found until the 14th Century in Germany. Called Arme Ritter or poor knights. And it wasn’t until the 15th Century until recipes for Pain Perdu (what we know as French Toast) began to surface. Pain Perdu translates to Lost Bread because in France it is typically made with bread that has already gone stale. However, in America, we consider French Toast a breakfast item whereas, in France, it’s eaten as dessert or as a snack.

French Toast is made by taking a piece of bread and soaking it in an egg mixture (eggs, milk, vanilla extract, cinnamon, nutmeg). Then bread is then pan-fried in butter until brown and cooked through. In America, it is traditionally served with a generous helping of maple syrup on top but it can be served with jam, honey or fruit.

So, based on this research, it seems that French Toast or bread soaked in egg and then fried first originated in Ancient Rome, therefore, making this delicious breakfast or snack item – Italian.