French immigration exploded between the 1850s & 1860s and the French became the fastest-growing population of immigrants in Los Angeles. Many of these French Angelenos became winemakers, bakers, grocers, walnut farmers and clothiers around the southeast pueblo plaza. These French immigrants helped build the first residential water system in L.A. and gave the city its first professional painter-photographer artist, Henri Penelon. 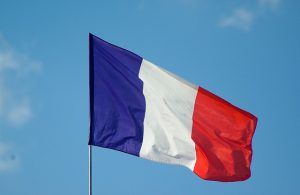 Every year French colonists flooded to the French District from all over Southern California on the 14th July to celebrate Bastille Day with a display of fireworks and parades that stretched well past midnight. The French were a tightly knit, proactive community and by 1860 French was the 2nd most spoken language in L.A. To protect themselves in the violent, dangerous wild west town of Los Angeles they brought in a French Foreign Legion unit. The French Hospital, today known as the Pacific Alliance Medical Center, was built in 1869 and served the French community for decades.

Soon the French Quarter became a popular place for eating and drinking and one of the finest clothing suppliers, Madam Fesenot’s Ville de Paris, became the place for fashionable ladies to shop. The best French bread could be found at Franco-American and hearty French cuisine such as cassoulet and French onion soup was served at top restaurants in the area. Haute Cuisine was first introduced by the French chef called “French Charlie” at the Commercial Restaurant which was intoned by the Los Angeles Times to be almost unbelievably good.

Union Station, constructed in 1930, destroyed the original Chinatown in Los Angeles and sadly led to the destruction of most of the French hotels and boarding houses around Aliso and Alameda streets. A flood of Chinese-Americans moved to the old French Quarter and soon the new Chinatown emerged which we all know today. The French hospital was sold in 1980 and became “The Pacific Alliance Medical Centre”, but the statue of “Joan of Arc” has remained as a reminder that thousands of French-Americans once called this district home.