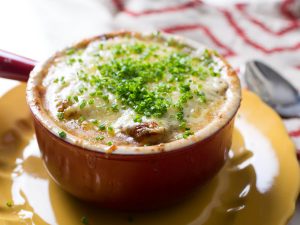 There’s nothing better on a brisk autumn evening or chilly winter afternoon than a steaming bowl of soup to warm you to the core, and there’s no better place to enjoy that soup than in France. Although we’ve all enjoyed soups modeled after the French variants, they just aren’t the same. If you have the time and patience–and skill–to make your own, then go for it. If not, then you’ll need to make the trip to France to experience the real thing. Luckily, famous French soup is very much worth a trip. Here are just a few of the soups you might want to try while you’re there!

Of course, you’ve had bisque. But you haven’t had it in France. Bisque is traditionally smooth and creamy, seasoned to perfection, and uses the broth of crustaceans as a flavor base. The sea creatures most often used for this purpose are lobster, crab, shrimp, langoustine or crayfish. You might not realize why the soup seems so thick, though. Rice is added while the soup is cooking, and usually pureed before fully prepared. The rice can also be removed through straining.

Ever heard of tomato bisque? How about some other kind of vegetable bisque? Well, guess what: that’s not real bisque! If you don’t have crustaceans, you don’t have bisque. For legal business efficiency purposes, they call it a bisque so it sounds familiar to those ordering it.

You’ve also probably tried French onion soup. Campbell’s really doesn’t cut it when compared to the real thing, though. This soup was a staple in the ancient world and didn’t reappear until the 1960s when the dear citizens of the U.S. decided they really love French cooking. The flavor bases of this soup are meat stock and onion. If you have French onion soup at a nice restaurant, it’ll probably be served with croutons and cheese or French bread (something else you’ll want to sample while you’re visiting France).

One type of tasty French soup you might not be as familiar with is called tourin d’ail doux, or more commonly smooth garlic soup. Its name holds a lot of meaning for this recipe, which often calls for at least twenty cloves of garlic. Other ingredients include flour, chicken stock, egg whites, tempered egg yolk and vinegar, and sometimes onion. If you don’t like the taste of garlic, then needless to say you will not be a fan of this famous French soup.

Another soup we’re less accustomed to hearing about is l’oille. The etymology of that word isn’t quite clear, but many historians believe it comes from the word “oule”, which accurately describes the type of pot in which the soup is most often prepared. It can’t just be a coincidence, can it? Surely not. The soup often uses a plethora of variety during its creation, and ingredients often include chicken, pigeon, veal, beef, parsnips, turnips, carrots, onion, leeks, orach, purslane and chard. After simmering for hours, the birds are transferred from the soup to a piece of lightly toasted bread. The remaining soup is strained over the bread and birds, and the rest of the meat and veggies are tossed in the trash! It seems like a terrific waste of good food, but it is good indeed.