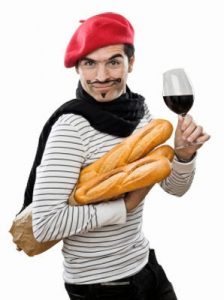 It’s hard to avoid. Whenever you have a group of people or minority that don’t quite fit in with the greater majority, you’ll inevitably find that the bigger group stereotypes the smaller group. Although they can sometimes be “good” stereotypes, they are mostly a source of negativity shared among individuals and groups. Sometimes, they are based on a kernel of truth. Often, they are not. So what kind of people do we think of when we start to consider the ways of the French? Well, the answers aren’t always easy to swallow, because most stereotypes are based on misunderstandings between different cultures. Here are just a few.

If you’ve ever traveled to France, then there’s a decent chance you found the service in the hospitality industry lacking compared to our own. We find it minimalist, and we believe their waiters are rude. As Americans, the name says it all: we believe when we dine out, the guys and girls who bring us our meals are to serve our every whim and need.

In France, that’s just not how it is. They’re not going to come ask how your meal is or if you need anything else in order to butter you up for a bigger tip. In France, it’s your job to flag them down and let them know exactly what you need. Tough luck if that’s not the way you like it. The French are professional, and that’s all you really need when dining out. To us, the wait staff in America is made up of a bunch of kids. To them, the wait staff is worthy of respect. They’re more adult. Therein lies the real difference.

You might think the French are all about fashion, and so it shouldn’t surprise you that a lot of Americans returning from overseas study come back with a new style of dress. But you know what? Every country has their own unique style. We simply romanticize theirs on the one hand or sometimes play it up as snobbish on the other. Not everyone adopts the same mode of dress or accessories, and not everyone smokes. Europeans, in general, treat sexuality and gender identity much differently than we do in the U.S., and that might be part of the reason why we see the French as much more likely to adopt certain dressing habits.

We often exaggerate the way in which the French speak aloud when they use certain colloquialisms. When someone says “ooh la la” in France, it’s usually because they’re genuinely surprised or impressed with something. When we say it while mocking them, we do it because we’re turned on or in a raucous mood. That’s not how it is overseas.

All cultures embody certain stereotypes, and whether or not we perpetuate those stereotypes is completely up to us. Unfortunately, most of us base perception on first impressions, and that means one thing: stereotypes will live on.