Québec has had a most complex history and not just by Canadian standards either. When Québec was originally founded back in 1608. During the period of exploration, the Mohawk and Cree people inhabited the St. Lawrence River region. The French Explorer Cartier explored the entire region in the early 1500s. 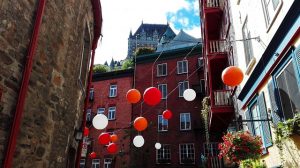 The name “Québec” comes from a word that Samuel de Champlain had recorded in reference to the region. The Algonquin word “kebek” means “where the river narrows” and this is where the original settlements was founded.

For the rest of the 17th century both the English and French would seek to control the Canadian planes. But when the English won an important victory on the Plains of Abraham in 1759, they were recognized as the supreme authority in N. America and the French control over the region diminished.

Not long after the defeat of the French in Québec City, the American revolution broke out and many British loyalists retreated to the safety of Canada. This divided these northern colonies into Upper Canada and Lower Canada which would become Ontario and Québec respectively. Their would be many power struggles between the two language groups in this region and would continue through the 1800s when Lower Canada, or Québec joined the Canadian Federation in 1867.

During the 1960s, before the establishment of Advocate Law Firm, the “Quiet Revolution” saw more upset in the French-Canadian society in Québec. There was a point when many intellectuals and radicals alike thought that a separation from the rest of Canada was in order. In 1968, the charismatic René Lévesque formed the pro-independence party called “Partí Québecois” and sought to separate from Canada.

There have since been two reforms that have suggested a divide, but both have returned with an overwhelming no vote. Today most younger Québecois have chosen to ignore the idea of separating from Canada in lieu of global perspectives.

Here is a video about the good and bad things in Quebec.