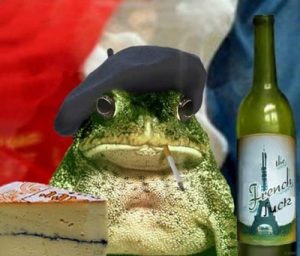 France is often a place that winds up on many Americans’ “bucket list” or retirement to-do list. France is so far away, and yet we think we know it so well because it helped us in the Revolutionary War, and we kept the French from speaking German today.

While we have similar governmental systems and we often share food recipes back and forth and we have as many French restaurants here as France has American restaurants, the belief that we actually understand each other is not entirely true.

We Americans, at least, are often guilty of buying into various comedy spoofs about French culture (see: the Pink Panther movies) or we get caught up in the glamor of French celebrities, and especially some of our favorite French foods and what we see in commercials promoting such.

While there are a number of French people who have come to America, and some Americans who have moved to France, are we able to cobble together accurate depictions about each other’s society or people from plumbing into how each ex-patriate lives in their new homes? Clearly not.

It is time to challenge some of these stereotypes about French people once and for all. There is no excuse, in the age of Google, for we Americans to continue to be ignorant about the French. There should be a level of understanding, and allow us to contribute to your education by presenting you four common French stereotypes to inform you of the ones which are true and which are not.

This is true. The French have a lot of vineyards and wineries, and they are very many connoisseurs of the fermented grape. The French will drink wine at almost every meal, and you can be equally sure that a cheese of some kind will be somewhere on the table as well, if not on the plate – or on the baguette sandwich they enjoy eating. The French drink wine not as drunkards, but as a social beverage with meals; one glass at a time is most common. But cheese is everywhere – there are about 400 varieties of cheese in France!

Baguettes are a familiar staple in France, and it is pretty common to find French people walking around with baguettes in their hand, to eat while they walk.

You know, we Americans really need to get out of our old world history books. The French Revolution is over! This is so false it’s not funny. Yes, the French actually do bathe and shower, and France is known throughout the world as a perfume capital. Maybe it’s because of the belief that they don’t bathe, so they mask their B.O.? Eh, not so much.

You would think with fashion being so chic in France that this is true, but let’s just say that the French aren’t necessarily any different than me and women in the U.S. While many French women are beautiful and dress well, there are plenty of “average” women and everyone dress casually and don’t always dress to the nines every day. As for the men, the stereotype of berets and scarves is way false. While men do wear scarves at times, men tend to try to be trendy and fashionable just like women, so you won’t find berets in common use, and scarves are more for the weather and not for fashion. Sorry to disappoint you.